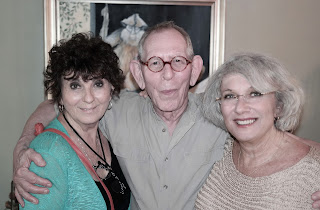 Several days ago i wrote about the person that did so much for the emerging Rhonda. Here are more of the details on the "Calibration of Life" we put together to honor John.

I had visited John Bryan not too long ago and received the not unexpected call, that he had pass away last week. I stopped by the day of the call to talk with his partner of 49 years, Churchill and we discussed plans for a celebration of life event. It was John’s wish that we hold any event in their beautiful garden. I volunteered to help in any way I could. I could see the Churchill was not in any condition to plan, so is told him I would help organize it. John was the event planner, not Churchill.

We settled on the last Sunday in April and I started calling friends and former Guild members. There was no clue as to how many would come. Age was a big factor and we had already lost many. John was the Palm Beach Piano Guild’s founder, so my first task, arranged for music, a keyboard and piano player. I had two in mind that had played at the Guild’s monthly concerts. Next, I contacted two good friends, former Guild members and we would work together on the food. We agreed to be there early to setup.

The day of the event, my first shock came when one of the piano players called sick. It was now critical that the other piano player be there. I was happy that we had talked the day before and confirmed. The celebration was to start at 2:00 and I arrived at 12:00. Shortly after several of the others, I had coordinated with arrived. We started washing glasses and sitting out the food. I had picked up a large cheese platter on the way there.

By 1:30, we had about 50 people and setup was complete.  A lot of food was coming in so we moved wine and soft drinks to another table and then quickly filled that space with food. By 2:00, we were not sure where to put all the food. Churchill and I decided that 2:30 would be the start time.

At 2:15 the piano player, Copeland Davis arrived. He is a local celebrity/musician and a great friend of the Guild. He had been on the Tonight Show several times and was amazingly talented. He could play classical, jazz and contemporary so I left it up to him what to play. I got him set up at the keyboard and started inviting all the guests to the garden. Although not planned, I was in charge.

All of the concerts that John had arranged over the years opened with a “standing ovation”. I explained in my welcome to all in attendance how we always opened our concerts. I then invited everyone to stand (as a tribute to John). As we stood we took time to reflect/meditate. Next a former Guild member read a short prayer (John’s favorite) and I spoke about the wonderful memories. I had someone scheduled to talk about the history of the Guild but she did not come in time. That fell to me, as I was prepared just in case. I introduced the music and Copland played for a short classical number, “The Wind Beneath My Wings” and then “MacArthur's Park”; one of John’s favorites. It was beautiful and by then at least a 100 people were in attendance.

After the music, I spoke again about the memories and used the quote “The afterlife is how we are remembered by those we leave behind.”  I then closed with “John you are enjoying a beautiful afterlife this afternoon with all of us remembering, honoring and celebrating your life. I talked about 10 minutes and after Churchill came up and spoke briefly. I put my arm around him and helped him get through his short thank you to everyone. All in attendance were invited to eat, drink, and remember John.

I honestly did not know how I had done. It was hard. After every one exited the garden, Copeland wanted to talk and said how much of an honor it was to be there. He had to leave for another concert so I prepared him a plate of food to take. Many came up and told me what I said was wonderful although I am not sure exactly what I did say.

Churchill wanted to give me credit for all the planning and execution although I was not all my doing. I had much help. We all stayed and talked for about two more hours and then all the ladies, including me, cleaned up. These are the ones that deserved full credit also. Everyone took home food and we left days of food and sweets for Churchill. Churchill nephew and family came in from Albany NY and you could see that he very much appreciated them being here. I talked to the family for a long time and they thanked me many times.

John was such a help to the emerging Rhonda over 25 years ago.  I was honored to have a part in celebrating a wonderful life.

On a very personal level, I am still amazed as to how I am accepted. It just feels right. I never gave a thought all afternoon about being anything other than Rhonda; being myself. If John had been there, I hope in some small way, I made him proud. I was not about me. It was all about a wonderful man that will be missed.