Sunday evening America suffered another senseless massacre.  Each one is the worst and they continue unabated. It is a cop-out to say that nothing can be done. Measures can be put in place. It is true that guns do not kill people however guns facilitate the action and make it easy to commit mass murder.


If someone wants materials to manufacture a large bomb the materials are controlled. Bomber Timothy McVeigh, used 4,000 pounds of ammonium nitrate to blow up the Alfred P. Murrah Federal Building in 1995. Ammonium nitrate is one of the most common farm fertilizers in the world. It now has limits as to how much you can buy. In late 2007 Congress passed a law requiring the Department of Homeland Security to develop a regulation program tracking any purchases over 25 pounds. Any reasonable person can understand the need to prevent another tragedy like Oklahoma City.

Since Congress allowed the federal assault weapons ban to lapse in 2004, we've seen tragedy after tragedy as deranged killers unleashed deadly firepower, murdering dozens of innocents. The National Rifle Association (NRA) has blocked any and all attempts to reinstate the ban and has prevented the passage of even a measure that would circumvent the mentally ill from purchasing weapons.


President Obama called for "common sense" regulation. Regulating magazine size is surely common sense. Large-capacity magazines can turn a semiautomatic pistol into a weapon of mass destruction, with some spitting out six shots per second as in The Orlando Pulse Nightclub (50 deaths). These are not a sportsman/hunter's weapons. They are meant to kill as many people as quickly as possible. Only law enforcement and the military should have access to this kind of firepower. Source (USNews)

Large capacity ammunition magazines are a common thread uniting many of the high-profile mass shootings in America.

The NRA represents gun manufacturers, not the US citizen nor the responsible gun owner. The NRA is serving the gunmaker lobby which is purely interested in policies that will promote greater gun sales and more profits? One need look no further than this crazy (no pun intended) NRA supported legislation.

In my home state of Florida, health providers, including mental health providers, are forbidden by law to even ask if a patient has a gun. Fact:
The NRA sponsored this legislation: On June 2, 2011, Florida Governor Rick Scott signed House Bill 155 (HB155) into law (Fla. Stat.790.338), limiting the ability of physicians to ask patients about firearm ownership. The law, entitled Medical Privacy Concerning Firearms, states that “a healthcare practitioner or a healthcare facility... may not intentionally enter any disclosed information concerning firearm ownership into the patient’s medical record if the practitioner knows that such information is not relevant to the patient’s medical care or safety, or the safety of others” (Ref. 1, Section 1)

The NRA is a terrorist organization.  If you are a member you are supporting a terrorist group set on putting profits above lives. When children must fear going to school and concert-goers fear for their life at a music festival, because of guns, it is terror that the NRA is supporting.


Let's put this in proper context. In 2001, the year when America suffered an unprecedented terrorist attack -- by far the biggest in our history -- roughly 3,000 people died from terrorism in the U.S. That same year 29,573 died from gun violence. 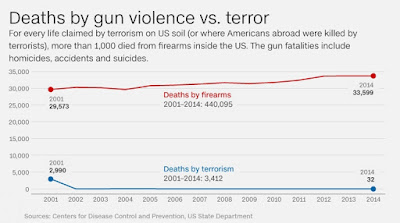 When will action be taken to prevent another senseless massacre? Responsible sporting gun ownership is protected under the Second Amendment, however, as with all weapons of mass destruction, responsible limits need to be in place. Politicians stand up to the NRA, a terrorist organization, and do your duty. Do you represent American citizens or the NRA?

If now is not the time for a discussion on this subject, then when?