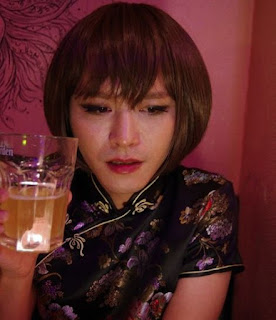 Crossdressing is a constant on Halloween. Many of us have used it as a vehicle to enable our first escape - Me included.  I have even referred to it as National Crossdressing Day. I typically do not go out that day unless there is a legitimate reason. Rhonda is not a costume.

What I do find interesting is seeing the occasional trick-or-treater come to the door cross dressed. Mostly amateur efforts, however on several occasions over the years I have seen someone making the grade. Likely not his first adventure out, nor the last. As the saying goes, "If only knew then what I know now".

What if an adult civilian tried crossdressing? That was the claim and narrative written up on the Japanese news site, SoraNews24. The title “16 Things I Learned From Dressing in Drag: Confessions of a One-night Crossdresser”. The observations written by jessicaocheltree are insightful coming from a non-transgender person. Was there a repeat performance. I would bet yes.


There are all kinds of men in the world, but I have arbitrarily decided that the kind of man that wants to try wearing women’s clothes at least once in his life are in the majority. I’m not talking about becoming a cross-dresser for life, but most guys would like to see what it’s like to go around in a dress at least for a little bit, right?

1. Being told you are pretty or cute is cause for extreme happiness. Everyone likes to be complimented on their appearance, regardless of gender. Although you might make a modest show of refusing the compliment, on the inside, you feel like jumping for joy.

16. After dress up time is over, you feel empty. Dressing as a woman was unexpectedly intoxicating, but I couldn’t stay like that forever. Going back to my usual self was kind of sad, though. I took off the makeup, removed the wig, traded my dress for my usual men’s clothes, and thought, “Well, that’s that.” It was rather dreary to look in the mirror and find the usual boring face reflected back at me. I almost wanted to cry.