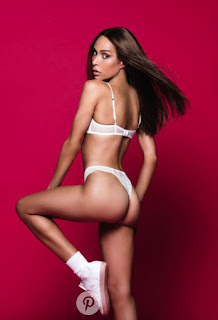 Playboy features first ever transgender Playmate as model Ines Rau bares her breasts and wears nothing but a pair of heels in Hef memorial edition.

By CHRIS SPARGO FOR DAILYMAIL.COM

The upcoming issue of 'Playboy' will feature a transgender model as the Playmate of the month - the first time this has ever occurred inside the pages of the men's magazine.

It was revealed this week that Ines Rau had landed a spot in the magazine's much-coveted centerfold, with the beauty of French-North African descent earning the title of November 2017 Playmate of the Month.

She is seen in the iconic bunny ears and a white angora sweater in one image and wearing nothing but a G-string as she poses with a string of lights wrapped around her bare breasts in another photo.

The 8-page spread, plus pullout centerfold, features a total of seven pictures of Rau.

And for the centerfold, Rau is photographed completely naked except for a pair of red velvet heels as she lies on the ground, thus covering up everything except for her rear.

Rau also makes it clear that she has no time for her transphobic critics, stating: 'If I want to get a sex change it's between myself and my body. I could hide it, but I don't, because I respect people.'