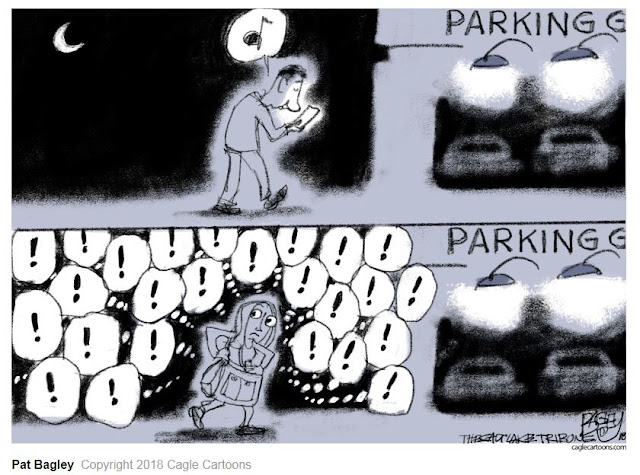 On one of my first ever shopping "Escapes", I realized that presenting as female had associated risk. I became keenly aware of my surroundings. I wanted to park close to the door of the mall and was noticing if anyone was getting out of their car at the same time. The contrast was shocking.

My perceived vulnerability was shocking!

I never give any of these actions even a third, much more a second thought. I was concerned. I always thought that maybe the element of surprise might be in my favor, however just how fast could I react in heels? Wallet, money, credit cards all in my purse which could be easily grabbed off my shoulder. As female I understood something bad could happen or I could be harassed for no other reason than my presentation; "being feminine".

Was my skirt too short and inviting trouble?  Would getting mugged be my fault simply for what I was wearing?  No one ‘invites’ a mugging or harassment like it would be a everyday occurrence. No one wants to feel insecure or be harassed. I, as a feminine person just want to be comfortable, look good and go about my day-to-day activities.

This became very poignant one evening as I was heading into the mall, this time dressed not as a female. The same mall that I had shopped the night earlier. I watched as a woman, heading out, clutched her purse a little tighter and looked down, rather than solicit eye contact. The reality of this situation produced a wave of sadness as I was now aware of both sides.

How ludicrous for politicians to say "A Scary Time For Boys", when adult females always face insecurities and harassment. To be feminine is to recognize this, act accordingly, and be mindful.

Be careful - Be understanding!

"The first step to solving a problem is admitting that you have one. We have a problem in our culture. Women are undervalued and often seen as sexual objects without brains, ambitions or abilities. This brilliant song  shines a light on the problem and allows all of us to start on the difficult journey of fixing the problem."  Writergurlny