Long Hair on Men: Only for the Young? 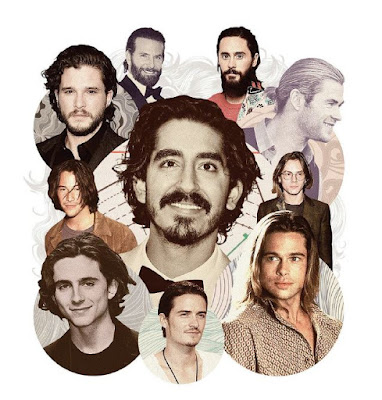 Today, shaggy guys are increasingly common. But the look still has its critics, especially when men fail to observe its expiration date.

JOSEPH KEEFER’S hair is longer than his girlfriend’s. Falling well past his shoulders, his mane outflows that of many members of the opposite sex. Yet the Los Angeles-based men’s fashion consultant wouldn’t think of chopping it off anytime soon. “At some point I’ll cut it when I’m older,” he said, “but I’m 34 and I’ve gotten this far, so I’ll hold onto it for a while.”

That Mr. Keefer has managed to “get this far” without incident shows just how acceptable long hair on men has become. Turn on “Game of Thrones” and you’ll spot Jon Snow (Kit Harington) tossing his trademark mop around militantly. Attend a New York Mets game and watch pitcher Noah Syndergaard throw fastballs, his blonde ’do streaming out from beneath his cap. Walk through an airport as I did recently, and 20-something men sporting Farrah Fawcett waves will have you doing double takes.


Of course, historically, it’s not as if crew cuts were the only option. In the 1968 Rolling Stones documentary “Sympathy for the Devil,” Mick Jagger and Keith Richards’s shaggy coifs are on full display. In the 1990s, the late actor River Phoenix was a Rapunzel-haired heartthrob. And if you want to get biblical, there’s always Samson’s abundant hair.

Though long-haired men are still not the norm, their ranks are, yes, growing, and while there are still critics who find the look unacceptable, they’re starting to seem out of touch. Even Samson is enjoying a renaissance: An action-movie reboot of the tale is coming in February, its hero sporting the requisite down-the-back hairdo.

As a Sikh, New York architectural designer Harry Chadha, 24, lets his hair grow naturally for religious reasons. It’s only recently that he’s noticed so many other adopters. “I joke that I’m the original,” said Mr. Chadha. When asked why he thinks others are resisting a clip, he cited a loosening of standards when it comes to the male image. “People seem freer about their appearance,” he said. Though it may sound implausible, Mr. Keefer has found long locks easier to maintain than a cropped cut. “I’ll condition my hair, but I mostly just run a brush through it before I shower and wash it,” he said.

There are complicating factors, however. Some guys think long hair has an expiration date. “Once it has a lot of gray, your hair might not look as good,” conceded Charles Mangan, a marketing director for Bravado, a New York merchandise and brand management company. Like others quoted, he is under 35 and feels that, trendy as it may be, long hair works better on those who haven’t yet encountered the scourge of gray hair and bald spots. Men like Colin
Farrell and Brad Pitt—once long-haired icons—have shorn their locks as they have gotten older.

Still, it is worth noting that in many workplaces (if not, say, the Senate), long hair is no longer verboten; none of the men I talked to had faced any censure at work. So if you look askance at a guy for his shag, ask yourself whether you want an outlook that’s increasingly out of fashion.