Dispatches From Elsewhere" Star Eve Lindley Chats About The New AMC Anthology Series
AMC’s original anthology series, "Dispatches from Elsewhere," created by and starring Jason Segel, is centered around four people who feel there’s something missing in their lives.

This foursome is brought together by chance when they stumble onto a puzzle. 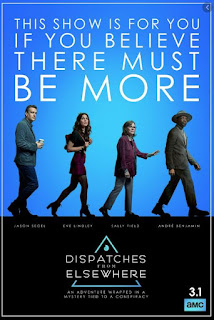 As they begin to accept mysterious challenges, they come to find that the mystery winds deeper than they imagined.

Grant, André Benjamin and Eve Lindley.BUILD is a live interview series like no other—a chance for fans to sit inches away from some of today’s biggest names in entertainment, tech, fashion and business as they share the stories behind their projects and passions.

Every conversation yields insights, inspiration and plenty of surprises as moderators and audience members ask questions.


“We held a casting call and Eve came in and I have to say, from the moment she started reading those lines, I knew that I had found my Simone, and that I would rewrite the part wherever needed to bring out these qualities that Eve was blessed with on her own,” he tells Vulture. “She’s an amazing actress and she made the part more complicated and gave Simone more depth than I ever could have managed on my own as a writer.”