Calamity Jane (Doris Day) rides into Deadwood, Dakota Territory as shotgun messenger on the stagecoach. When boasting of her stagecoach's hazardous journey through Indian Territory the men laugh at her exaggerated account of an attack by the Sioux. No one is laughing when survivors of an Indian attack come through and relate that the man Calamity has set her sights on, US Cavalry Lt Danny Gilmartin (Philip Carey) was killed. When Calamity presses the survivors for the way Gilmartin was killed they admit they don't know and fled in fright. An enraged Calamity rides into the encampment of a Sioux war party with her six shooters blazing to rescue the captured Danny. 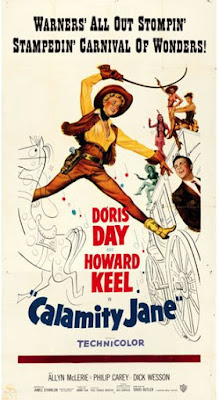 Meanwhile, the local saloon bar, the Golden Garter, sends for beautiful women to appear on the stage and entertain the residents of a town with few females. The saloon owner is surprised when his latest booking, a Frances Fryer, arrives in town and turns out to be a man named Francis Fryer (Dick Wesson). Fryer is reluctantly persuaded to perform a stage act in drag, and during an increasingly confident performance his wig is lost, revealing him as a man. The audience begin to storm out. Calamity, thinking quickly in all the panic, vows to get them the one woman they are all drooling over: singer Adelaid Adams (Gale Robbins), who is in Chicago. Francis Fryer points out that Adams wouldn't be seen dead in that town but Calamity is still determined to bring her. Wild Bill Hickok (Howard Keel) laughs at the idea and tells Calamity that the night Adams steps on the stage, he will come to the opening dressed as a Sioux squaw lugging a papoose. (Wikipedia)


Thus goes the movie - A little bit of movie cross dressing from the past...