Underwear for Your Masculine Center (A Girl's Prospective)

So come all ye of varying genders, and let’s talk about underwear for the masculine of center.

I’ve always been that kid with hyper-senses. A loose hair between my back and shirt drives me crazy. That ball of fuzz that forms in the toe of the sock after washing drives me crazy. Traditional underwear seams? Used to drive me crazy. It’s been almost a decade since I last wore a pair of traditional underwear. When I started college, my (then) girlfriend wore Hanes boy short underwear and I was excited to get in them. Get in a pair of my own, I mean. So it all started there; with this idea that I was still wearing girl’s underwear. The model on the little cardboard covering was a girl. So when I checked out at the register, it was okay. When my mom saw them, it was okay because they were girls’ underwear.

The next change happened about 4 years after that when I met my now (and forever) girlfriend. It’s another essay and several poems to explain how she changed my life. She taught me everything I know about sexuality and gender. Taught me, really taught me that it was okay to be me; whoever that me is. That’s when I got my first pair of men’s underwear. Actually, she got them for me in a surf/skate shop in Eilat, Israel, where we met. They were Rip Curl and they were teal and they were – and still are – my favorite pair of boxers. Over that year, I acquired several more men’s trunks, but was still wearing my girls’ boy shorts as well. It wasn’t until I got back to the States that I really changed my whole wardrobe.

I started buying everything that made me feel comfortable, and that included more men’s underwear so that I could be wearing them on the daily. I started with Hollister – my brand of choice at the time. Since then, I’ve branched out to American Eagle, Express, Hanes and even Champion. It took some time, but I’ve finally figured out what I like and what I don’t like, and I never realized boxers could be so different. 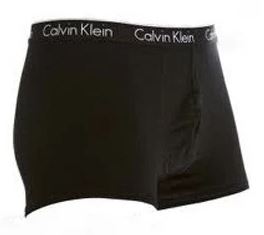 Eventually, I’d like to add a little Calvin Klein to my drawer, but that’s a top shelf boxer for my wallet right now. So if you’re shopping on more of a budget, I guarantee the American Eagle band peeking out above your jeans will be just as sexy to your human-love as Calvin Klein. It can be a little scary walking into the men’s department for the first time and especially purchasing men’s underwear, but it’ll feel so good knowing that you’ve fucked with at least one person’s idea of gender. And it’ll feel even better when you wear them for the first time.

* About Autostraddle: Founded in March 2009 by Riese Bernard and Alexandra Vega and still run by a team of progressively feminist queer and trans folks, Autostraddle is a digital publication and real life community for multiple generations of LGBTQIA+ humans (and their friends). The driving fire behind what we hope to build at Autostraddle is a space for lesbians and queer people — especially people of color — to be our entire selves, to be known for the multi-dimensional ways we move in the world.