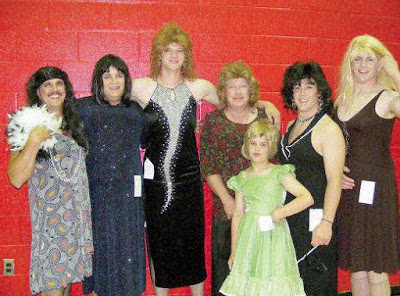 My note:  We all love the "Womanless" photos.  They provide a legitimate fantasy/excuse and some take the experience serious, which always sets off bells as to motivation.  I did one my sophomore year in collage and wore my girlfriends prom dress. I looked great and had full make, wig and heels. I did not win because someone took it even more serious than I - yes, hard to imagine.  Photos are long gone but it was so much fun and a wonderful memory.

What makes this "Ms. Wheelbilly" pageant photo and the article below interesting is the detail write up; enjoy.

Cancer benefit is anything but a 'drag'

What do all these men -- truckers, farmers, businessmen, sons, fathers and husbands -- have in common?

They look divine in Dior.

Okay, maybe "divine" is stretching it a bit, almost as much as the Dior gets stretched. What these men, contestants in the Wheelbillys Relay For Life Womanless Pageant, have in common is they aren't afraid to sacrifice their dignity for a good cause -- and a lot of laughs. Once a year, they dress as beauty pageant contestants and strut their stuff on the runway to see who will be crowned Ms. Wheelbilly of the year.

"We laughed so hard we cried," said Diane Neeley, the coordinator of the Wheelbilly team, and the culprit who came up with the idea in the first place. "Everyone thought I was crazy, but I'm the kind of person you don't tell 'No' to because I will find a way to do what needs to be done."

This year, the Ms. Wheelbilly 2009 Womanless Pageant and Junior Miss Wheelbilly contest is at 7 p.m. Saturday, March 14, at the Liberty School cafeteria. Admission is $2 and free for children 5 and under.

Neeley was the coordinator for Tyson's Relay for Life teams years ago when she worked there as an administrative assistant. When she left Tyson, Relay for Life's Judi Burton asked her to create another team, this one drawn from friends and neighbors in Wheel. Thus, the "Wheelbilly" team was born. Once created, the team had to figure out how to best serve its purpose -- raising money for Relay for Life, an organization that contributes to cancer research and to the Hope Lodge, where patients can stay while undergoing treatment.

"There are so many things we could do," she said. "Donuts, ask for donations, set out those jars to collect change."

Those didn't seem to be enough -- or bring enough money -- to satisfy her. Then, she ran across a "Womanless Beauty Pageant' fundraiser on the Internet.

"I thought, can we do this? I found out -- yes, we can! You look at your husband and you look at your son and you say, 'You are going to do this for Mama,'" she said.

And they do. Her own husband, Kim, and her son, Spencer, have joined in the fun the first two years and plan to do it again this year. With the stage name of Naughty Nelly, Kim Neeley struts on stage to the tune of "Dude Looks Like a Lady."

"And he does!" Diane laughed. "Mrs. Doubtfire."

But Spencer won't be competing this year -- as the reigning Ms. Wheelbilly 2008, he will be on stage in full regalia to crown the 2009 winner.

Don't go suspecting collusion when the event organizer's son wins the pageant. The only judges here are the collection boxes.

"The winner is determined by who raises the most money," said Diane, who said donations count as votes. "The contestants usually bring their own entourage."

This year, for the first time, contestants will be able to start collecting donations before the pageant, but Diane said she still expects most of the money to come in during the show.

"The guys get a stage name -- one was Anita Man and another one was Foxy Roxy -- and they pick their song, They come out strutting and the crowd goes wild."

The songs, she said, are usually related to women, such as "Pretty Woman," "American Woman," or "Redneck Woman."

The show doubled in size from the first year to the second, which brought in more than $3,000 for Relay for Life, and she expects it to be even bigger this year. But more contestants are needed, especially since the younger contestants have their own pageant this year, the Junior Miss Wheelbilly Pageant. Anyone interested needs to contact her at 685-8053 or 607-8053 at least three or four days before the pageant so his song can be added to the lineup.

"They are all such good sports," she said of the men. "My husband just kept telling me that I was crazy, up until I was putting on his mascara. He said, 'I can't believe I'm doing this for you.'"

While some of the contestants look remarkably good in their evening gowns and makeup, they all go for the laugh factor.

"One year, Mike Fisher -- he has this big, long beard -- he was a belly dancer. That's probably the strangest one we've had," said Diane.

There will be soft drinks available at the event, but the Wheelbillys opted not to do a dinner and dessert venue.

"We try not to involve a lost of cost," said Diane. "The tickets are only $2 and that lets people set the range of what they want to spend that night. Everything we raise goes to Relay."

And if the men shed their dignity for a few hours, that's nothing compared to how quickly they work to regain it.

"It's always fun to see how fast they get all that makeup off before they leave," said Diane.