Why Femboy Is More Than Just a Trend

Another example of the younger generation "Getting It".
A femboy is a person, typically under the age of 30 years, who is biologically male. However, this person will often present himself in a very feminine manner. This behavior may be exhibited part of the time, or all of the time.  It is interesting that they embrace the name.
_______________

BY MEGAN C. HILLS
12 Sep 2020
Self-identified ‘femboy’ Kevin Ninh’s first feminine clothing purchase was a complete accident. After a top from the women’s section found its way into the men’s department and ultimately into his shopping basket, he was asked if he still wanted it. He said yes.

“I remember my mom purchased it for me,” the 24 year old content creator tells Evening Standard Insider. “That’s when I knew that my style wasn’t restricted to just labels.”

Now Ninh, who goes by Flawless Kevin online, has a wardrobe that includes pleated miniskirts, floral ruched dresses and (his prized possession) a Kendall Jenner-esque Nylon Prada bag - all of which he shares proudly on platforms like TikTok, YouTube and Instagram.

He’s just one of many young men who are part of the digital feminine boy community, expressing themselves on social media platforms through fashion and make-up. It’s the next online chapter in gender fluid fashion, which has long been championed by the LGBTQ+ community.
Femme men have held space online for years now (Reddit’s /r/feminineboys forum has nearly 70k members since starting in 2012). However, they’ve become more visible than ever on TikTok. #FemboyFriday has become a popular weekly theme with over 158.3m views on the platform as users including Ninh and 17 year old Seth Tamunopriye Williams (@thesethwilliams on Instagram) have blown up, showing off rainbow skirts, embellished bustiers and complex make-ups looks straight out of Euphoria - expanding beyond their community and into the wider digital world.

One of the biggest unifiers among femme boys is that they proudly incorporate feminine clothing into their wardrobes with strong ties to the LGBT community. Beyond that, they’re a diverse group, made up of people with different gender identities, sexualities and more.
For example, Ninh says a common misunderstanding viewers have of him is that he’s “in the process of transitioning or am transgender”, while Williams asserts that “feminine men are not any ‘weaker’ than masculine men” - stressing that "the fabric on your body doesn’t make you any less of a man if that’s what you identify as.”
While the word ‘femboy’ has been used in the past to insult feminine men, and according to Ninh has a "connotation of fetishisation", Williams is among those who have embraced it - explaining “people are trying to repurpose the word to give it a positive meaning.”
The increased visibility wound up inspiring others to join the hashtags as well as cisgendered heterosexual men to bring more femme items into their wardrobes, with 18 year old #FemboyFriday participant Judd Anderson joining the new wave. Anderson, who goes by .jvdd on TikTok, began incorporating skirts into his wardrobe in May and had a very different way in than Ninh - as his was rooted in music.

“It was during quarantine and I decided to find new music to listen to with all the extra time,” he recalls. “I started to develop a strong liking to Nirvana, which made me want to research the band and that’s when I instantly became interested in Kurt Cobain. One thing that specifically caught my attention was pictures of him performing in dresses and skirts.”

Anderson doesn’t see himself as a femboy but “doesn’t mind” if he’s referred to as one. He has “no idea” why his initial video blew up (as well as follow ups of himself in different skirts and dresses), but believes it might be because it’s still “unexpected to see a guy in a skirt.”
Saying that the responses to his videos have been largely positive, like Ninh and Williams he’s also been subject to occasional abuse and assumptions based on his choice of femme clothing. For example, Anderson says, “People tend to assume my sexuality by calling me gay or ‘sus’ is what a lot of people say, solely based on the fact I wear more femme clothing and makeup."
Anderson adds, "People have been presenting themselves more femme for a long time but were constantly hated on and bullied."
He feels that with increasing the visibility of men wearing femme items (referencing Styles again), is a "way to make it become more socially accepted." He continues, " The more people see it and see positivity coming from everyone it’ll make more people who’ve wanted to express themself in a more femme matter finally do it and not have to be worried about getting hate for the clothes they wear or how they want to present themself."

Williams, who also uses the hashtag #FemboyEveryday, says, “I don’t think that there is anything wrong with cishet men experimenting with their self expression. However, people need to be cognizant of the fact that our identities aren’t a ‘trend’ and that this is who we are.”
“Amongst my circle, I’ve noticed that more discernibly or openly queer men receive much more hate. Our community has been fighting gender norms for years, so we should get the same appreciation as our cishet counterparts,” he says.
Read the complete article here 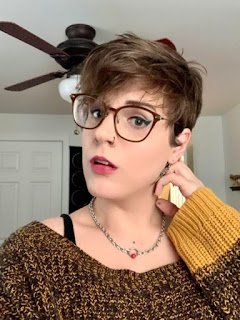