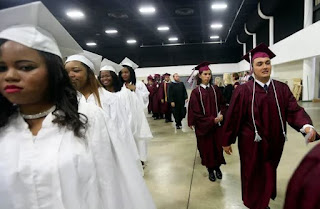 Palm Beach County’s public high schools can no longer make male and female seniors wear different color caps and gowns at graduation ceremonies because, officials say, it conflicts with the rights of transgender and non-binary students.

School district administrators prohibited the practice Wednesday after a years-long campaign by school board member Erica Whitfield, who argued that forcing students to choose a gown color based on their gender identity could provoke wrenching internal and family conflicts.

“Gender-based policies, rules, and practices can have the effect of marginalizing, stigmatizing, and excluding students, whether they are gender nonconforming or not,” Shawntoyia Bernard, the school board’s general counsel, wrote in a memo to board members Tuesday.

“Therefore, it appears that a gender-neutral dress code for graduation whereby one color graduation gown is used will ensure that ALL students are afforded such equal protection rights under the law," she wrote.

The move was applauded by the Palm Beach County Human Rights Council, which called it an important step to make graduation ceremonies "inclusive of all gender identities and expressions."

"By doing away with the requirement for students to choose graduation colors based on their sex assigned at birth, the school district has taken a significant step forward in alleviating potential awkwardness at graduation time," Rand Hoch, the organization's president, said in a statement.