In November 2017, Dorfman came out as non-binary and began using they pronouns. On July 22, 2021, Dorfman came out as a transgender woman and began using she pronouns. She revealed in an interview that she had already been "privately identifying and living as a woman" for almost a year. She chose to retain her birth name of Tommy, to which she feels "very connected" and which honors her mother's brother who died when Dorfman was a month old. In April 2022, Dorfman identified as a lesbian. (Wikipedia)

Here is my previous May 22, "Success Story" on Tommy Dorfman

Hollywood began to take notice soon after I published my debut novel Detransition, Baby—which follows a trans woman, a cis woman and a trans woman who has detransitioned as they try to form an unconventional family—in early 2021. One of the calls was from the actor Tommy Dorfman. I figured Tommy would ask about a role in a potential adaptation. But no—it turned out Tommy just wanted to connect with me as a fellow queer storyteller trying to navigate the waters of the film industry and a culture in flux. We talked for two hours: it was a rare, genuine call from an artist who simply wanted to bond over telling stories.Before then, I knew Tommy only by reputation, as the actor who rose to fame in 2017 in the role of Ryan Shaver, the conniving, scene-stealing poet on the Netflix series 13 Reasons Why. I kept hearing about Tommy from artists I respected. When everyone I knew was debating Jeremy O. Harris’ Slave Play, Tommy was tapped to star in Harris’ next project, Daddy, alongside Ronald Peet, Hari Nef and the legendary Alan Cumming.

And now, Tommy is set to direct an adaptation of Mason Deaver’s I Wish You All the Best, is starring this fall in the Channel 4 limited series Fracture and has a role in Lena Dunham’s upcoming film Sharp Stick. But this work is only one part of Tommy’s public presence: with a quick glance at Instagram, it becomes clear—even if you don’t recognize all the brand names (which I don’t)—that Tommy dresses fashionably, with fashionable people, in fashionable places. Tommy embodies a very modern type of celebrity, one that’s increasingly influential—and increasingly scrutinized. And there’s something that both paparazzi and Tommy’s followers began to notice over the past year or so: a change in Tommy’s style and appearance. People began to speculate what that shift might mean in the comments and on blogs; some of the speculation has been lurid, some tentatively supportive. And yet, for the past year, Tommy has said nothing, acknowledged no change, just continued on—until now.

This is a fascinating interview - Read all of it here:

Here is my favorite question:

Peters: Would you say that you are coming out? 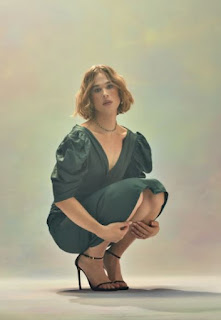 Dorfman: It’s funny to think about coming out, because I haven’t gone anywhere. I view today as a reintroduction to me as a woman, having made a transition medically. Coming out is always viewed as this grand reveal, but I was never not out. Today is about clarity: I am a trans woman. My pronouns are she/her. My name is Tommy.

It is not transition. Or it is, but not as an idea of going somewhere. Just that I am actually myself

Transitioning has been liberating and clarifying.