During the runup of the '24 election, we are going to hear the term Fascism thrown around a lot. We need to understand how this philosophy could relate to our future.

A political philosophy, movement, or regime (such as that of the Fascisti) that exalts nation and often race above the individual and that stands for a centralized autocratic government headed by a dictatorial leader, [with] severe economic and social regimentation, and forcible suppression of opposition. (Merriam-Webster)

Fascism dictates its narrow policies without regard for the majority's will.
Here is the question. What has happened to the Republican Party? Has it become the Republican-Fascist party? Just as when marriage partners hyphenate their last name, they become one in name.

Here is my short list of evidence of what is happening:

On average last year, 37% of Americans described their political views as moderate. This percentage is evenly divided among those who identify as either the Democratic Party or the Republican Party.

E.g. - According to the Renew Democracy Initiative: Dictators [fascist rulers] may rise to power in a democracy through several ways. One way is the result of political polarization, where the competing political sides no longer want to cooperate with one another, allowing violent or extremist groups to take over politics. The other way, elites first grab on to power via democratic means [elections], then strip away democratic rights. [the Florida / DeSantis way]

See my post on the "The Hungarian Model - Ron DeSantis is following a trail blazed by a Hungarian authoritarian".

This fascist take over can be stopped.  Remember "A fascist ruler will wield supreme power" only if given it. Is this the America we want?

Going forward I will refer to the Republican Party as the "Republican-Fascist Party", until there is evidence to the contrary. 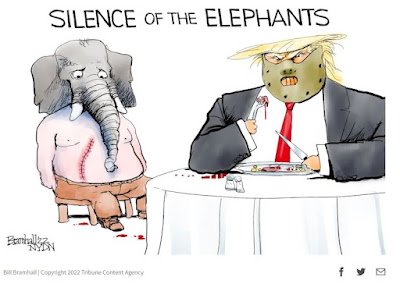