I played football as a kid. Our county had a peewee league for the 12 and under with about 6 teams representing various communities. Being small, and somewhat of a sissy, my mother had many reservations. See my post "Growing Up The Chameleon". Although shy I learned that I was fearless. At nine years old I would do as I was told and hit and tackle boys twice my size. That did not go unnoticed. 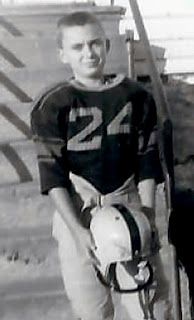 As a newly minted rough-and-tumble boy, I found myself now accepted by my peers. Wow; had I turned a corner?  No, the girl within was still there and never left, although I did enjoy my newfound acceptance. The next winter I had a growth spurt (early for boys) and got more play where brute fearlessness was expected.  I noticed that during practice other boys avoided me and would move their places in line to avoid going one-on-one with me. I was no longer the sissy of the team. My coach mentored me and the next year, being the sports writer for our county newspaper, choose me for the "All County" team.

I played in high school; Freshman and VJ, and was one of the team co-captains. My position was defensive middle linebacker and safety. I was fast and could tackle. Still fearless, but now dwarfed by many teammates who had now received their teen growth spurt. Tackling became more difficult and I started to recognize that sports may not be my calling.

After our final JV season game, 10th grade, the varsity coach took over our final practice to see who was coming his way for his next season. Never had I been involved in such a brutal practice. There were rumors about his practices. Our largest player and center had his nose brutally broken during a drill. The next day his face was a mess and never the same. Others limped in before the practice was over. I got the feeling the coach did not like me and set me up for an injury. He threw a very high pass for me to catch. Jumping up in the air, while still stretching with both arms up, I was tackled hard coming down breaking my collarbone. I looked up and the sadistic, SOB coach was laughing. I was in pain with weeks of recovery involved. I vowed to never play for him and did not. I was over football.

The next football season after I graduated from high school, this coach sent an eleventh-grade kid back in to play after one very serious hit a few plays earlier. He collapsed on the bench after a few more plays and died the next day from the injuries he receive that night.

I believe the coach was fired later that year, and the family's consolation was the school board named the high school stadium after their son. Three years earlier, after my last encounter with this coach, I predicted he would kill a player sooner or later.

Scientific American, January 6, 2023 stated this after the most recent Damar Hamlin’s collapse:

Football is a spectacle where excessive violence is mundane, because hits that cause injuries are a constant occurrence, and spectators are desensitized to it. Consumers of the sport assume players will withstand any bodily affront, so they are shocked when a player’s physical limits are exceeded, often on very public stages. People with a vested interest in professional football rationalize excessive violence in this structured space, as well as the ones that encompass college, high school, and peewee play, all because they assume that rules, equipment, and regulations exist to prevent death. But this is false protection. While this form of entertainment has been normalized, Hamlin’s injury demonstrates that ordinary violence has potentially deadly consequences…

Football brought me out of a shell and for that I am grateful. Maybe a safer alternative could have worked just as well. Today’s question is, "how much longer will we normalize this violence for entertainment?" Because of timely and expert medical care, Damar Hamlin survived. Surely this will not be the last such incident. 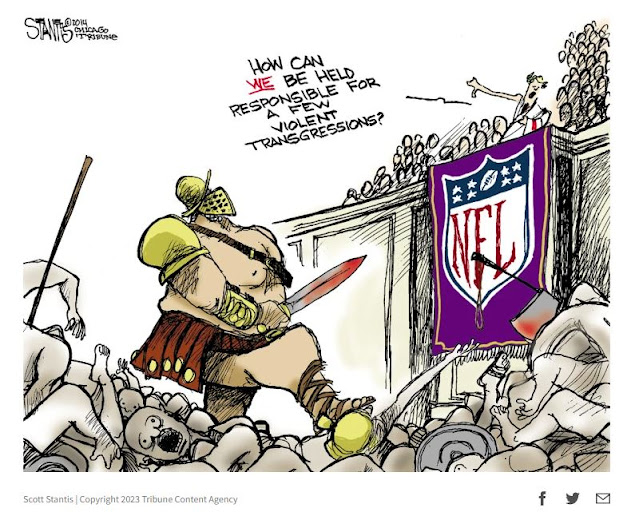 Comments?
Posted by rhonda's escape at 5:00 AM