Defining Justin Bond's gender is no less difficult than figuring out what makes the 47-year-old performer's cabaret act so compelling. It can be hilarious, heart-wrenching, vulnerable, sardonic, Wiccan, and world-weary all at the same time.

Whether singing about the ancient gender-variant priests, the Galli, as Bond did in the 2010 show Re:Galli Blonde (A Sissy Fix), or performing as Kiki DuRane alongside Kenny Mellman's Herb as the tragic, washed-up lounge act Kiki and Herb, which launched them both into international notoriety, there is something powerfully both about the performer: masculine/feminine, mordant/fabulous, comic/tragic.

Recently, Bond has decided to begin transitioning. V will not behaving any surgery.It's more on an enhancement process.

I like my penis, and I am keeping it, but I am creating a transbody —a physical record on my body and a medical record that I am a transgendered person. I am turned on by people who are genuinely themselves. That's what dendrophile means. Having my own nature. I guess I have realized it's not nature versus nurture. It's nurturing your nature."

Wikipedia - Justin Vivian Bond (born May 9, 1963) is an American singer-songwriter and actor. Described as "the best cabaret artist of [their] generation" and a "tornado of art and activism", they[a] first achieved prominence under the pseudonym of Kiki DuRane in the stage duo Kiki and Herb, an act born out of a collaboration with long-time co-star Kenny Mellman. With a musical voice self-described as "kind of woody and full with a lot of vibration", Bond is a Tony-nominated (2007) performer who has received GLAAD (2000), Obie (2001), Bessie (2004), Ethyl (2007), and a Foundation for Contemporary Arts Grants to Artists (2012) awards. Bond is transgender. 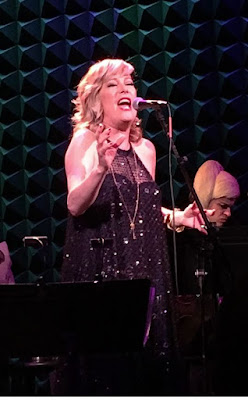 Bond is transgender and has said, "for me to claim to be either a man or a woman, feels like a lie. My identity falls somewhere in the middle and is constantly shifting." They undergo feminizing hormone therapy to appear more feminine, and reported feeling great as a result, noting that "I like the way my body looks. Emotionally, it's evened me out." They do not intend to undergo sex reassignment surgery, explaining that "I like my penis, and I am keeping it, but I am creating a transbody—a physical record on my body and a medical record that I am a transgendered person." In 2011, Bond adopted the middle name of Vivian, identifying as Justin Vivian Bond instead of Justin Bond. They use the gender-inclusive honorific Mx. (in place of Ms./Mr.) and neopronoun v (with self instead of her/himself), a reference to Bond's middle name.

From the NY Times article: Turning Androgyny Into Art

In concert at the end of 2014, Bond disclosed having received an invitation to return home for Thanksgiving, conditional upon leaving behind "that fake woman." Acknowledging that "a lot of trans-kids get kicked out of their homes," they mused. "I didn't until I was 51. So I think I'm gonna make it." Elsewhere, they have said that "if it wasn't for my family and the rage they engendered in me, I wouldn't be here."