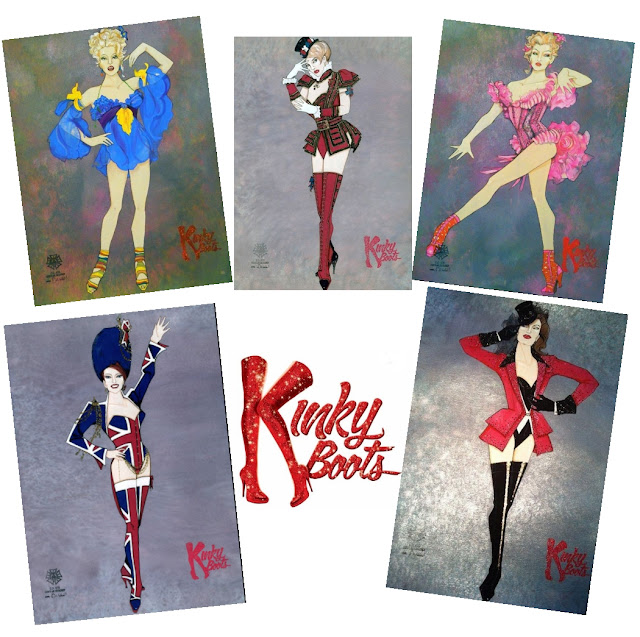 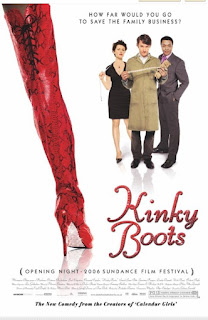 Tuesday evening I had the immense pleasure of seeing Kinky Boots the Broadway play again.  Likely all of us have seen the movie and if not I highly recommend it.  It is about us – about acceptance, about our fathers, about business, and about fun.  Need I show more than the costume drawing above, all worn by men.  Here is the play/movie synopsis:

Based on a true story and the indie film of the same name, Kinky Boots follows young Brit Charlie Price, who abandons his family’s shoe factory to live with his demanding girlfriend in London. After the unexpected death of his father, Charlie returns to the struggling factory and finds it’s up to him to figure out a way to keep the business alive. Enter Lola, a fabulous drag queen, who gives Charlie the idea to create ladies’ shoes for men. Soon, the factory is turning out “kinky boots” under the supervision of Charlie and Lola, but can this harebrained scheme actually work? And can these two extremely different men find a common ground and become real friends?

And yes, the music was by Cyndi Lauper - my Monday post.


Here are some beautiful quotes from the play:

Lola: Thing is, Mike, ask any woman what she likes most in a man. Compassion, tenderness, sensitivity. Traditionally the female virtues. Perhaps what women secretly desire is a man who is fundamentally a woman.


Currently playing at the Hirschfeld Theatre, 302 West 45th Street, New York, NY and the road show playing in many cities around the country.  It is in Fort Lauderdale, Broward Performing Art Center  March 2-13 and other cities.  Check the schedule here.