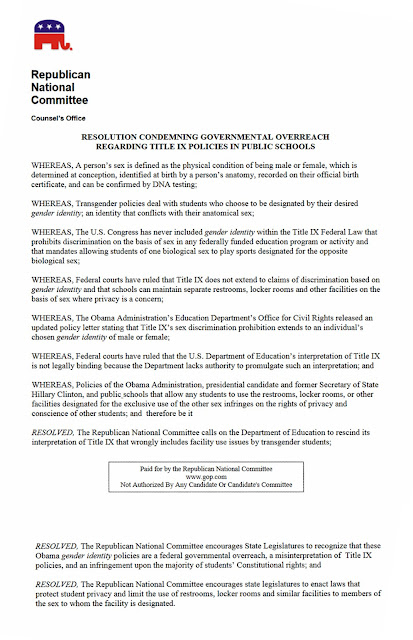 Read this policy statement in full
by clicking on the above link.

Please note their first statement is: WHEREAS, A person’s sex is defined as the physical condition of being male or female, which is determined at conception, identified at birth by a person’s anatomy, recorded on their official birth certificate, and can be confirmed by DNA testing.

And note their final statement is: RESOLVED, The Republican National Committee encourages state legislatures to enact laws that protect student privacy and limit the use of restrooms, locker rooms and similar facilities to members of the sex to whom the facility is designated.

The Republican National Committee (RNC) is calling on the Department of Education to rescind its interpretation of Title IX that includes facility use by transgender students. To go one step further, the RNC is asking states to enact laws dealing with transgender use of bathrooms.
____________

I personally do not like venturing into the political arena however this is too flagrant to ignore.  This is a first attempt to establish “bathroom laws” that will take away our personal freedom.

Political progress has been made but in contrast to the life experience of transgender individuals around the world, the RNC defines gender as “the physical condition of being male or female,” and it claims gender is irrevocably determined at birth and can be confirmed via a test of DNA.

Just this week, the Human Rights Campaign issued a report detailing an unprecedented 44 anti-trans bills now pending in state legislatures in 16 states across the country.  In no uncertain terms, the RNC resolution rejects the legitimacy of transgender identities and calls for policies that refuse us access to the bathrooms that match our gender identity.

Make no mistake if we don’t vote and speak out we will be hurt.  Geena Rocero, last week in the Huffington Post stated it this way:


There is a long battle for trans rights ahead. We must continue to tell our stories, speak our truth and serve our community to the best of our ability.