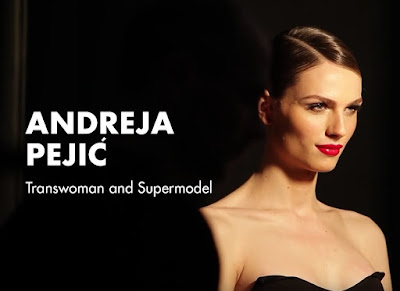 BE BOLD. BE UNEXPECTED. BE YOU. – Meet Andreja Pejić
YouTube Video

Yesterday I posted about Caitlyn Jenner being the new face of MAC Cosmetics. Leann reminded that Andreja Pejić is also a spokesperson with Make Up For Ever Cosmetics.  Thank you Leann.

Check out an informative article at Fishionista and a lot more here about her Campaign With Make Up For Ever.

Now she's breaking barriers again by landing a major beauty campaign with LVMH-owned cosmetics brand Make Up For Ever. The announcement broke Tuesday in a Vogue interview with the model, who was photographed by Patrick Demarchelier for the magazine's May issue. Make Up Forever confirmed the news to Fashionista and a representative for the brand said more details would be "revealed soon." No word yet as to when the campaign will debut or what products Pejic will be modeling.

The news makes Pejic one of the first transgender models to score a major beauty campaign, alongside Brazilian model Lea T, who was named the face of Redken Chromatics Haircolor in November.

When I started my transgender journey many years ago, I would have never guessed that such positive visibility would be possible.
Posted by rhonda's escape at 6:43 PM