Instead of doing all they can to help the poor as Jesus teaches, a CINO follows the Hebrew tradition of tithing only 10% to a church. A CINO values money over God. A CINO prays in public and on social media even though Jesus said to pray in private. Often a CINO will use the term Christian to promote political values that are not actually Christian.

The 24-hour block on Graham’s popular Facebook account was reportedly prompted by concerns that a two-year-old post he wrote attacking transgender people’s rights possibly violated the company’s standards on hate speech. Read more at the HUFFPOST 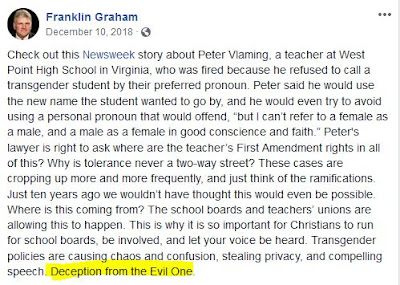 Facebook’s publicly posted community standards prohibit hate speech, which it defines as a “direct attack” on people based on a range of protected characteristics, including gender identity. It defines an attack as “violent or dehumanizing speech, statements of inferiority, or calls for exclusion or segregation.”


So the week's CINO award goes to Franklin Graham. 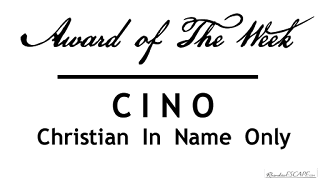