Why Should You Care About Gerrymandering?


Gerrymandering is a practice intended to establish a political advantage for a particular party or group by manipulating district boundaries. In addition to its use achieving desired electoral results for a particular party, gerrymandering may be used to help or hinder a particular demographic, such as a political, ethnic, racial, linguistic, religious, or class group, such as in U.S. federal voting district boundaries that produce a majority of constituents representative of African-American or other racial minorities, known as "majority-minority districts". Gerrymandering can also be used to protect incumbents. (Wikipedia)


We like to think that we have competitive congressional elections, but the district itself can have more to do with who wins an election than the candidate and his/her ideas. This spells trouble for our democracy. I did not have to look very far to see the results of gerrymandering.

Brian Mast my Representative for Florida's 18th congressional district since January 3, 2017, seems to be a likable guy. A political unknown who rode in on the Trump wave of 2016 is a Republican and war hero. While deployed in Afghanistan, he worked as a bomb disposal expert under the elite Joint Special Operations Command. The last improvised explosive device that he found resulted in catastrophic injuries, which included the loss of both of his legs.

I applaud his valor, courage and willingness to serve. He deserves the honor of now representing his (my) district in Congress. My problem is not why he is serving, but how it came about. 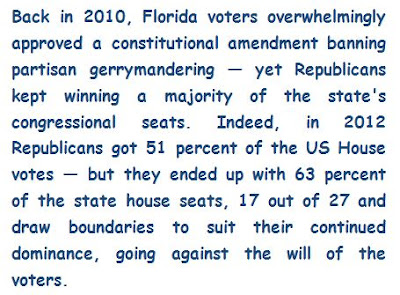 The Florida's 18th congressional district spans three very diverse counties; St. Lucie County on the north, Martin County in the middle and Northern Palm Beach County, (Jupiter where I live). The northern counties are largely rural and historically, Republican. Thus no matter how the southern area of the district votes, which is largely Democratic, the District will be represented by a Republican. Voter cherry picking or gerrymandered.

As you look at how the map is drawn you see it negates, natural bounders, (rivers, canals, interstate highways) and physical bounties county/city lines. Studying the map you see actual streets carved out which cut completely along perceived racial boundaries. A traditional area of African-American voters have been put into a district all of their own and then had their vote diluted by extending that district to the west. This extended area takes in a rural area and several large white dominate communities.  ($1,000,000+ homes).

Politician are only serving their interest. Shame on then! Our vote need to be reverent. Politician cry voter fraud is one person does not have their driver's license to vote yet ignore this most obvious examples of voter fraud; gerrymandering.

Politician that are in gerrymandered districts (either Republican or Democratic)  must constantly vote to please only their party constituents, thus perpetuating hyper divisions. Also their loyalty is to the party that has created their district not the electorate.

Let’s all work together to make sure our government work once again, "Of the people, for the people, by the people".  It is not about winning or loosing. It is about having a working representative form of government. Speak up.

The Supreme Court to hear cases on partisan gerrymandering. 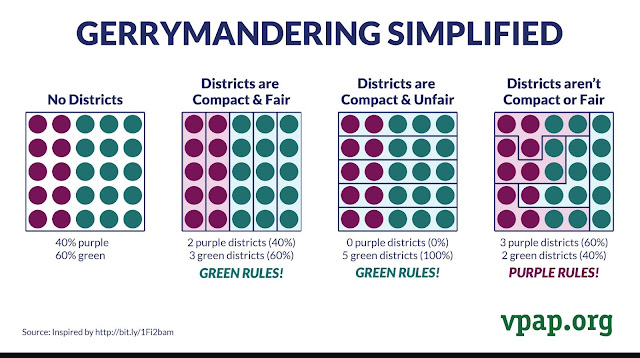