Monsiuer d'Eon is a Woman 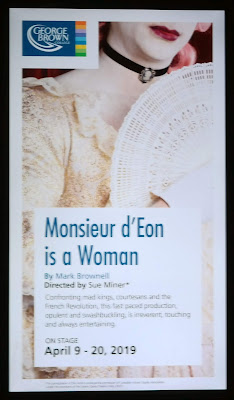 This past weekend I visited Toronto, Ontario and had many fun/exciting "Escapes". On Friday evening I attended a fascinating play with much relevance for us. It was at the Young Centre located in Toronto's historic Distillery District.

A little piece of trivia: Before the term transvestism was used, the process of "men who dressed as a women, adopted feminine mannerisms, clothing, etc" was called Eonism. This, in a way recognized the remarkable life of a Charles-Geneviève-Louis-Auguste-André-Timothée d'Éon de Beaumont; usually known as The Chevalier d'Éon.

Also the largest and longest established transgender support group in the UK gives nod to d'Éon by going by the name The Beaumont Society.  On their site is an extensive biography of Chevalier d'Éon.

Wikipedia describe his life this way: Chevalier d'Éon, was a French diplomat, spy, Freemason and soldier who fought in the Seven Years' War. D'Éon had androgynous physical characteristics and natural abilities as a mimic and a spy. D'Éon appeared publicly as a man and pursued masculine occupations for 49 years, although during that time d'Éon successfully infiltrated the court of Empress Elizabeth of Russia by presenting as a woman. For 33 years, from 1777, d'Éon dressed as a woman, identifying as female. Doctors who examined d'Éon's body after death discovered "male organs in every respect perfectly formed", but also feminine characteristics.

The play, set in the 18 century with appropriate costumes, attacked many gender norms still relevant today. With comedy at times and seriousness, it detailed how d'Éon played both sides of French aristocracy, spied for France in Russia, then became a French Ambassador to England and there became a national curiosity. It details how Lloyd's of London, then a coffee house betting parlor, took odds on d'Éon's actual gender. We all could be so lucky. See also my post on Old Story - New Portrait

With fencing matches and intelligent dialog, the play cleverly left open as many questions as it answered.

If you have not read several of the books available on Chevalier d'Éon's life, do.  He lived a life full of narrow "escapes". 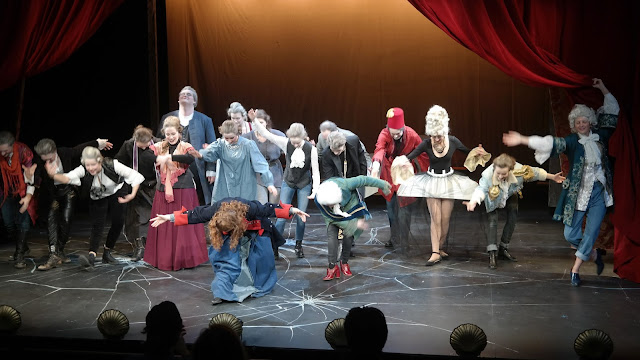 Toronto playwright Mark Brownell’s Governor General Award nominated play tells the astonishing true story of an 18th Century celebrant of the French Court who admits to being a woman at the peak of his political career. Along the way Monsieur d’Eon crosses swords with diplomats, spies, and wine connoisseurs as well as being on the speculating gossip tongues of all the crowns, celebrities and betting houses of Europe. Confronting mad kings, courtesans and the French Revolution, this fast-paced production, opulent and swashbuckling, is irreverent, touching and always entertaining.