Pride and the Cringe Factor. 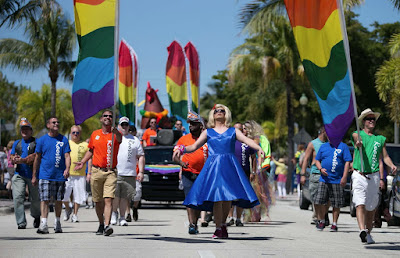 
The gay pride season is starting again.  Palm Beach has it pride week and parade early before the summer heat kicks in. Question: Should we celibate gay pride? Better question - Why not celebrate with our fellow LGBT brothers and sisters?

First pride - the second definition of pride goes like this:  Pleasure or satisfaction taken in an achievement, possession, or association.  The first definition is about self-respect. By definition, I take pride in my family, my professional accomplishments, and my trained ability to communicate.  These things I have worked to master.  About being transgender, this is the way I feel:


I had nothing to do with creating this gender incongruity and I accept the fact it is a permanent characteristic. My life is now ‘out to the world’ so I had no alternative but to own and accept it.


It has taken me many years to accept being transgender.  I do not think I ever disliked the characteristic, but it certainly has complicated my life like being dyslexic; something else I could not change.  Early on, I had to hide being transgender to ensure acceptance among those who would not understand.  How could I ask anyone else to understand, if I could not understand myself.   Denial was an early means of coping, thinking it was something I would outgrow or it would just go away.  I actually thought that if I finally saw myself all dressed up, I would be so disgusted that I would never need to do it again. Kind of the opposite of pride.  Obviously that did not work.

We are the “T” part of the LGBT equation and do benefit from the visibility that this alphabetic soup provides.  Our early organizations like Tri-Ess did all it could to distance itself from the gay community denying membership to anyone not straight by their definition.  That was wrong on many levels and did much to hinder transgender progress.  We are now out.  The former attorney general of the United States came out in support of us, the transgender community. We have come a long way.  Whatever you may be along the spectrum; cross dresser, no-op, pre-op, post-op, entertainer, fully transitioned, androgynous, gender queer, M2F, or F2M we are all transgender.

Back to the question – “Why not celebrate with our fellow LGBT brothers and sisters?”  Let us not underplay the fact we have much to celebrate. Progress has been made. Same-sex marriage is the law of the land. The whole of the LGBT community have stepped up to defend us in the absurd bathroom bills. Thank you. Discrimination is not gone but it is recognized for what it is - hate and bigotry.  These are uncertain times and many would like to push all of us back to the closet.  Never!

We the transgender, are the most visible “day-to-day” part of LGBT equation and the most vulnerable. We do not wear a one-day costume. Outrageous behavior tolerated for one day, reflect in a negative way on us year round.  I look forward to a day when that will not be part of the pride experience.

Whether we march or not, It would be disingenuous on our part to not support our gay brothers and sisters.  They support us.

What is your opinion?