Brian, our "I love Ballet Flats champion" sent me a beautiful post. I ask Brian "What have been some of the reactions?" These are priceless and he has so may I will break it up over the this Friday and next.  Enjoy:

For the past 5 1/2 years I've only boughten my Tory Burch flats collection and I could write a lot more about just boutique experiences with the sales girl and interaction with Tory Burch customer service but for now I'll leave the sales girl stories out. As I'm sure you're aware if you google man wearing flats you will find my picture everywhere.  Some posts I authorized and some were created without my permission.  So photo's abound.

This is my definition of the word reaction:

The way someone acts or responds to something they see or a situation they're in.

When Rhonda asked me to do a guest post about wearing ballet flats she was also curious about the reactions I receive since it's not everyday you see a male wearing a pair of ballet flats. When I accepted my desire to wear ballet flats, specifically Tory Burch (TB) flats, I also accepted that some people might react. And react they have, I could write a book about the various positive and negative reactions over the past several years. 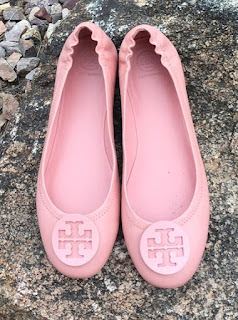 Now day's most people are so busy on their phones or life in general they don't notice I'm wearing ballet flats.  The most common reaction from people (usually girls or women) that do notice my flats is first off, telling the person or group of people they're with.  They say something like, "did you see that guys shoes," or "that guy is wearing ballet flats," often creates instant shock and everyone in the group wants to see.  Once they've confirmed what they saw there's often giggling, laughter, comments and occasionally some use their camera phone to capture the Kodak moment.  All pretty harmless reactions that I easily accept.

There have been very few instances where someone's negative reaction or comments have made me feel uncomfortable. Most positive reactions have come from women that share a passion for shoes or ballet flats and don't really care I'm a guy.  For instances, I was wearing my black patent Tory Burch Reva flats (my first pair of Tory's) while looking at a Tory Burch display at Nordstroms.  There was a young women beside me that was wear the classic black with gold medallion TB Reva flats, the same style as I was looking to buy that day. I asked her how she liked her flats but she seemed confused why a guy was asking such a question.  Once I pointed out I was also wearing a pair of Tory's she opened up and we chatted for a few minutes about our flats then we parted way.

A while later at the Tory Burch boutique I had just finished paying for my new classic TB Revas when that same girl entered the boutique, she saw I had a bag in my hand and asked which ones I bought.  After I told her she said, "good choice, I think you'll love them."   It's nice when women think guys should own and wear cute flats. Very positive.

Another day while wearing a pair of TB Reva flats at the mall I saw an attractive young women wearing a snake print pair of Tory flats. She appeared to be kind so I mentioned that I liked here flats.  Again I pointed out I was also wearing a pair of Tory's and we chatted for several minutes.  She said she had lots of shopping to do before her Spa appointment later that day and off she went.  Again we had just shared our passion for ballet flats and I sensed that she didn't care I was a guy.  A couple hours later, out of nowhere, there she was with an armful of bags.  She said to me, "I have to show you the Tory flats I bought."  She showed me her new Tory's and off she went to her Spa appointment.  A positive experience because we both shared a passion for cute flats.

Now onto the fun part.  These are a few of the more memorable and certainly creative reactions but they all send the same basic message.  That being, they know I'm a male and they know I'm wearing women's ballet flats.


I'm a regular at the Tory Burch boutiques and feel very comfortable trying on and buying my flats there.  The boutiques are often busy but my amazing TB sales girls treat me the same or better than their female clients.  There have been several occasions where other customer comment or share thoughts about the flats I'm trying on.  One day while trying on a pair of patent sand color TB bow flats the lady sitting opposite to me started to comment about the flats I was trying on.  It was like one big run on sentence.  I don't think she even stopped to breath.  It went something like this:

I turned and looked at my TB sales girl and she just shrugged her shoulders and smiled.  I got the flats on sale but that ladies speech was priceless. 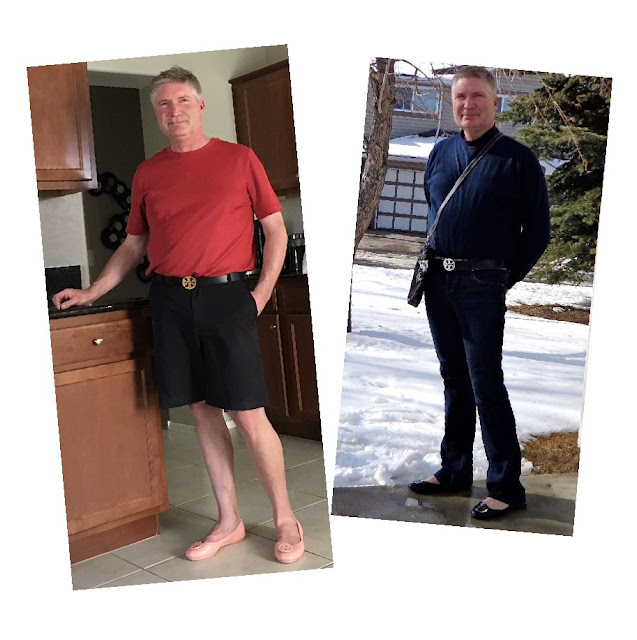 Brian, thanks for sharing these!!!