Brian, our "I love Ballet Flats champion" sent me a beautiful guest post and I posted part one last Friday. His experiences are priceless and had so may that I broke them up into two parts. Part 1 contains some background information so be sure to read that one also.  Below is part 2: Enjoy: 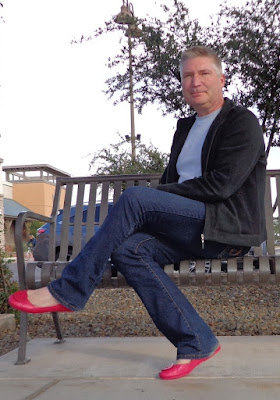 During a trip to do some banking I was wearing my violet colored Tory Burch flats. I was the only person in line and there were two people being helped by the female tellers behind the counter.  The lady at the customer service desk spotted my flats.  I could tell she "needed" to tell the two women working behind the counter. She walked over to the counter and called the two over even thought they were with customers. The three of them were huddled together and glancing over at me every few seconds.  After they a finished glancing over they all returned to their work stations.  As I walk up to the counter I could see the girl staring down at my flats.  She was very polite and started working on my banking request.  Out of nowhere she yells over to the customer service girl and says, "the code for what we were just talking about is O I C."  I took that as meaning "OH I SEE, his flats.  Very creative.

I've had lots of various reactions when riding in elevators.  People often get on, look to see who's on the elevator then either look up or look down.  Once it was just me and another women.  As she looked down she spotted my flats and got an instant case of the giggles, she could hardly contain herself.  I think I know what she was giggling at. 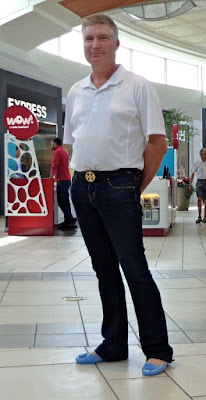 One day while shopping I was wearing my black leather with silver medallion Tory Burch Reva flats. I decided to take a break so I had a seat in the comfy chairs and started people watching.  I noticed a guy and girl walking towards me, she seemed fixated on the shiny Tory medallion on my flats.  I could see she was staring at them so I looked the other way.  Next thing I know she stops her boyfriend or husband and is standing directly in front of me about 4 feet away.  She stands on her tip toes, gives him a big kiss and says to him (loud enough for me to hear) "sweetie, promise me you'll never buy yourself a pair of shoes like the ones he's wearing."  The poor guy looked baffled and wasn't sure where he should be looking.  The girl looked me in the eye and giggled.  Her comment was said to her guy but directed at me.  I appreciated the way she confirmed that she knew I was wearing a pair of Tory Burch flats.

I was in a Starbucks lineup while wearing my black leather with gold medallion Tory Burch Revas.  From behind I heard a couple of bubbly young ladies chatting away as they join in line behind me.  As the line moved forward I made the 180 turn and they were now directly beside me.  All of a sudden, silence.  One girl spotted my flats and started whispering to the other.  I did overhear her say something about "big gold coins on the toes," likely referring to the gold Tory medallion on my flats. The line moved forward and again they were behind me.  The one girl was no longer whispering and I heard her say to her friend, "what are you doing?"  Next I heard, "oh my god you are cruel."  A split second after that I heard the sound of coins hitting the tile floor.  The one girl had dropped several pennies and was now bending down to pick them up, or should I say get a better look at the women's flats I was wearing.  I thought that was a creative way to let me know that they know I'm wearing women's flats.

I've never got angry with anyone's reaction.  It's a free world and these various reactions are a spur of the moment expression of what people feel. It's the same free world that allows me to wear cute women's flat.


Brian we all applaud your sense of style, great taste in shoes,your courage to escape and be your self. The view response to your first post has been terrific and I personally want to thank you for sharing. We look forward to more of your escape experiences and fun.