Fashion and The 70's 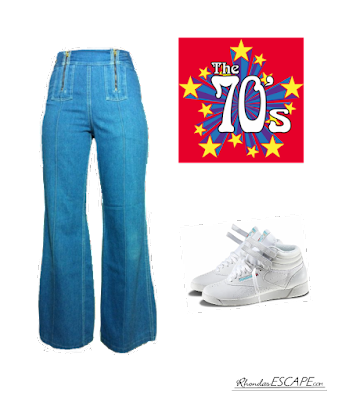 I was browsing eBay checking my sales when I noticed other jeans skirts like the ones I have for sale.  There was one skirt that I love - a vintage Levi two zip jeans skirt. "I must not buy - I must not buy."

OK, I feel better. The urge will pass.  The two front/side zippers brought back a wonderful memory of the Levi jeans shown in the layout here.  The decade was the  70’s and I had that pair. Although not at all "out" like I am now, I wore them all the time on weekends, fully knowing they were a female cut and look. I guess I did not care and thought they were really cute; still do think they are cute.

To add to the androgynous look I had a pair of the Reebok Princess Sneakers. Love the name. Both the regular and the hightop variety as showed.  Every now and again I would see the Princess sneakers on another man but lacked the nerve to ask if they knew they were a woman’s style. Then again I was never approached either. They were super comfortable. 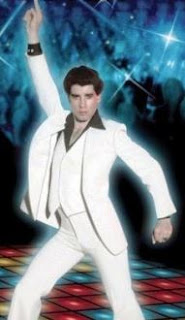 Just two of the boundaries I pushed. The 70’s were a magic time for fashion. Men and woman’s bell bottom (flair as they call them now) jeans, platform shoes, white suits and disco. Did you have a white polyester  suit?  I did.

If you were alive in the '70 you remember the iconic fashion in the film, Saturday Night Fever. According to Style Fashion:


On seeing John Travolta strut down a New York street in the opening credits of what became a career defining performance, Fred Astaire was moved to remark that John Travolta had simply had 'it'. In 1977 the 'it' in question was one of the most stylish film performances of all time.