I Love A Success Story - The Young People Get It...

A lesbian couple at an Ohio high school said they never expected to be voted as prom king and queen, but that's what happened last month.

Annie Wise and Riley Loudermilk, both 18, have been dating for six months. They were voted prom king and queen at Kings High School in Kings Mill, Ohio, on April 17.

They told CNN that they believe this is the first time an LGBTQ couple has been crowned prom king and queen in this district.

"I didn't think that we would've won because prom king and queen just seemed like a popularity thing," Loudermilk said. "It was definitely so exciting to know we had so many people who had supported us."

"It was super overwhelming," Wise said. "It was the best feeling in the world, definitely something I'll never forget."

The teens said overall their school has been supportive of them being a lesbian couple, which they said was surprising in a conservative area such as Warren County, where the school is located. But not everyone was happy.

But the mothers of the two girls told the affiliate they were proud of their daughters for breaking the barrier.

"Some people, you're never going to change their mind. And you know what? That's OK too. People are allowed to believe and feel what they believe and feel," Wise's mother, Jen Kirby, said. 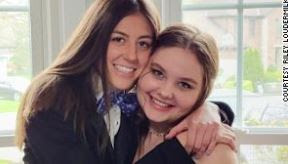 Loudermilk told CNN most of the negativity she and Wise have encountered came from comments on the Kings Local School District's Facebook post announcing that they won. They said it's mostly been from adults they don't know and who don't live in their district. The school has been working to delete the negative comments, but there are "so many comments still flowing in every day," Loudermilk said.