(CNN) Anorexia. Depression. Loneliness. If motor racing requires a high level of endurance, then Charlie Martin is well versed in navigating life's twists and turns -- on and off the track.

It was in 2012 that Martin transitioned. Two years later, she won her first event in France at Saint-Gouéno at the wheel of a Westfield SEiW, breaking the class record by two seconds. Now, she's intent on becoming the first transgender driver to compete in the Le Mans 24 Hour race.

Alongside her commitment to supporting LGBT communities -- which she signifies with a distinctive blue butterfly logo -- Martin is the only elite transgender driver in motorsport and one of the few athletes defending the right for trans girls to take part in women's sports.

In light of the recent increase in anti-transgender legislation and policies across the US, her activism feels increasingly significant.

Martin says that sharing her story has allowed her to change the course of her career for the better, a trajectory she hopes to mirror through her work as a Stonewall Sport Champion. 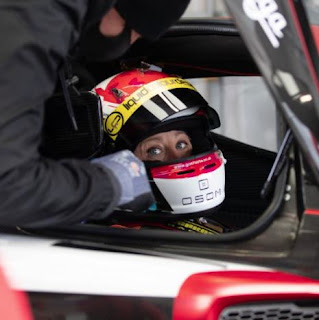 "When you have an opportunity like this, it feels too important, especially at a time like now where there is so much discrimination happening against the trans community," she says. "It's really alarming to see."

She's not wrong. Activists have already called 2021 a record-breaking year for anti-transgender legislation in the US, with 31 states introducing bills that ban transgender girls from participating in school sports consistent with their gender identities. The bills are also seeking to limit access to gender affirming health care.

Likewise, according to a survey from LGBT+ anti-violence charity Galop, 81% of 227 respondents in the UK reported experiencing a form of transphobic hate crime in the 12 months leading up to October 2019.

"This is about kids striving to better themselves, their self-esteem, their vision of what they can achieve ... sport is a big part of that," Martin adds. "Denying that ... it blows my mind."

From a caterpillar to a butterfly

It seems that her boundless sense of optimism has led her to where she is today, a motif encompassed by her blue butterfly logo.

"If a caterpillar can turn into a butterfly, then to me, it symbolizes possibility ... incredible things can happen in life if you believe in them."

Charlie Martin racing with Praga for 2021
Posted by rhonda's escape at 5:00 AM