This Success Story Keeps Getting Better 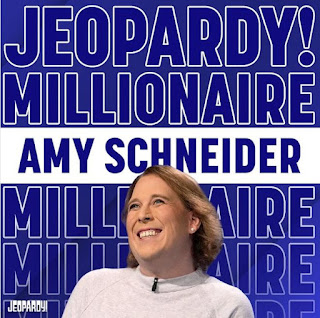 Throughout her historic winning streak, Amy Schneider has broken record after record — but the latest one might just be the most remarkable of them all.

On January 7, the California-based engineering manager was quick on the buzzer following a nerve-wracking game the day before. Amy secured an early lead during her 28th Jeopardy! game and after starting out with a total of $977,400, she won an additional $42,200. With that, the Ohio native officially surpassed the $1 million mark ($1,019,600) and her incredible accomplishment was threefold — she is only the fifth person to do so in the quiz show’s history, the fourth person to accomplish this record in regular season play and the first woman to become part of the millionaire club.