We have embraced his desire and bought or made G-strings and bra tops. We’ve taught him to keep this private, explaining that other people may not understand, while ensuring we communicate it’s OK with us.

“Everyone is different and everyone is special,” is the message we try to convey. He tells us he enjoys it because it makes him feel good. 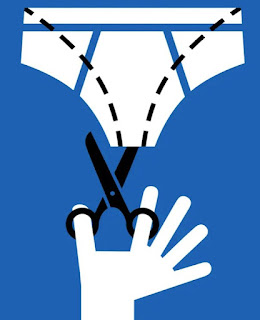 Initially, he tried making G-strings by cutting up his underpants. This is when we realised he needed help with making and buying the underwear he wanted. After this, when the scissors kept going missing and we found a new pair of (boys’) underpants chopped up, we were annoyed and he got upset. He said he didn’t like himself and couldn’t understand why he was doing it. We calmed him and reassured him that we loved him, but said we were cross with him for cutting up new underwear.

This was when he said he had been trying to make a bra and he’d done a pretty good job. I took him shopping so he could make a selection and my husband took him to buy fabric to make his own items. We put these, with his own pair of scissors, in a box in his room. He was happy and we thought the problem was solved. Recently, the scissors disappeared again and my husband said he’d found a onesie that had been cut up.

I’d welcome advice on how to raise a cross-dressing child, and how to approach this latest occurrence of cutting his own clothes.

There was a much longer answer given. Here is the summary:

How do you raise a cross-dressing child? Just how you would raise any child. You listen, love, support; you help him discover who he is, what he likes, help him understand about appropriate behaviour – so it’s OK to cut up X but not Y; to wear this here but not there etc. And if he still cuts up the wrong things, you need to look at what he’s trying to communicate to you. Look at and respond to your son, not what he wears.