The Art of Walking on 12-centimeter Stilettos

My Note: A little out of date but worth the look. The only part of the Trump administration I miss...

The American (former) first lady has done it again. She has managed to 'sneak' her shoes into the 'official agenda' of her husband, the 45th president of the United States himself. This time she did it at the G7 summit, held last in the French town of Biarritz, (24–26 August 2019) ,where he got off Air Force One at Bordeaux airport wearing fuchsia Christian Louboutin salons, matching the print of her Calvin Klein dress.

Those heels were only the first of the day, she later chose other 'louboutins' (the famous French heels with the red lacquered sole) for her meeting with Emmanuel and Brigitte Macron. For this occasion she opted for some metallic silver salons; without a doubt, the most spectacular of the summit.

Melania Trump only descended from her 12-centimetre (4.72 inches) stilettos during Sunday morning when, along with the rest of the wives of the leaders (Akie Abe, wife of the Japanese prime minister or Cecilia Morel, wife of the Chilean president, among others), they performed a sightseeing tour of the area, led by host Brigitte Macron, wife of the French president.

For that day, the former model of Slovenian origin chose flat-toed white ballerinas. She was still the tallest. It should not be forgotten that Trump's wife is 1.80 in height, only four inches shorter than her husband's, and who she exceeds by two centimeters each time her Louboutin is worn. 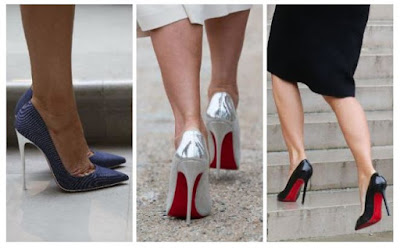 This has been one of the rare occasions, although not the only one, in which the current first lady of the United States has been seen to get off her 'impossible' stilettos, yes, with which she knows how to walk like nobody else, even on the lawn. A nod to the king Louis XIV who imposed his famous high-heeled shoes, in addition to the huge wigs, as a custom in the dress of the time? Louboutin himself confessed on one occasion that "the statue of Louis XIV wears one of my favorite shoes", with a four-inch heel and always a red sole (signature of the one who was at that time the personal shoemaker of the so-called 'Sun King' , the French Nicholas Lestage). 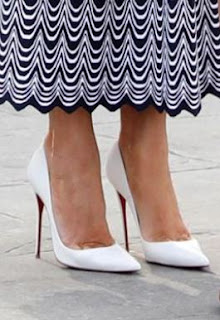 Addicted to needle 'heels', Melania Trump, who even opted for other 'louboutins', 12 centimetres and 700 euros, to fulfill the tradition of planting a cutting of the original Eisenhower oak in the White House garden, in her role as first lady; she opted for other red patent leather 'stilettos' from the French firm for her latest 'look' in Biarritz. Previously, to stroll along the beaches of the Cote des Basques, she chose other 'louboutins', this time in white. Four 'heels' on which the ex-mannequin walks looking at the world from another perspective.
Do not forget that, according to experts, one of the best ways to have social status was through impractical customs. History has not changed much.