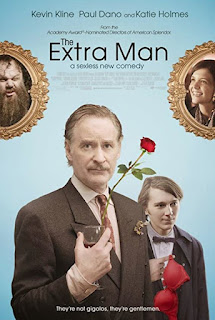 The Extra Man - A failed playwright, Henry Harrison, develops an odd mentor relationship with Louis Ives, a troubled, cross-dressing, aspiring writer to whom Henry sublets a room in his New York apartment. Henry teaches Louis the art of being an "extra man", accompanying and entertaining wealthy older women in their fanciful social lives. Along the way, Louis encounters an environmentally conscious co-worker, Mary Powell, and a jealous, eccentric neighbor, Gershon.

What was most interesting other than the young crossdressing Louis Ives, is the many references to Palm Beach and the Colony Hotel. This is the hotel/bar that Katie and I frequent on Thursday evenings. Here in Palm Beach the men who escort society women are referred to as "Walkers".  I have know several over the years and it was not unusual to have walkers at our Piano Guild concerts escorting widowed patrons of the arts/music.
The 2010 movies is available on Amazon Prime this month.  A fun eclectic watch.