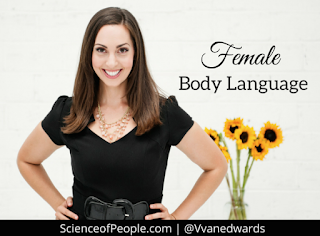 I cannot tell you the number of time I have been at gender conferences or support group meeting with our beautifully dressed girls. They had spent a lot time on their makeup, clothing and hair only to ruin the image with the wrong body language. They communicated that something was amiss - a "tell". You have seen it - The not so subtle and unattractive legs spread. The power stance with legs apart and arms crossed.  This is natural male posture but you want to communicate that you are female.

This video talks a lot about courting non-verbal body language but there are elements that will help us to understand the differences between male and female actions:

Here are some of the behaviors (female) that are considered likable in both social, business and romantic situations:

Be the best you can be!